Diary of a Guide…Art and a Vintage Bus

A mixed bag this week of coach tours, a lecture and a visit to the National Gallery. 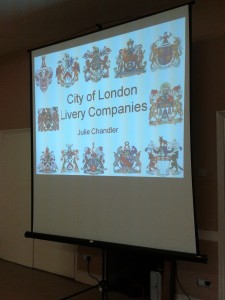 This afternoon I was off on the train to Luton to give a talk to Luton U3A (University of the Third Age) History Group on the City of London Livery Companies.

As a City of London Guide, I often give lectures on ‘City’ topics and love talking about the livery companies; their origins, history and function – both hundreds of years ago and today.

So now I go up to the Luton area about six times a year. One of the members meets me at the station, I give my talk, have a nice cup of tea, and then I get dropped back at the station. Just lovely.

Thursday
A full day’s tour today. I was due to take a coach load to Stonehenge and Bath, but added on a stop at Windsor on the way following a call from the tour operator yesterday.

Once I’d got my group into Windsor Castle, given them a short tour of the castle precincts and left them to visit the State Apartments on their own, I met up with a fellow Blue Badge Guide who I hadn’t seen for a few months for a coffee and a catch up. One of the nice things about this job is that you occasionally end up in the same place at the same time as a friend. Lucy and I trained together on the Blue Badge course and during the main season it’s hard to meet up properly, so we grab time when we can to share stories and swap tips.

Who thought it would rain at Stonehenge today??

Back in the coach park, two of my visitors were late back and in the end I had to head off to Bath without them – there’s only so long you can make 50 other people wait! However, the tour operator was able to contact the missing couple and another coach gave them a lift from Windsor to Bath, where we were reunited just in time to go into the Roman Baths. The couple were terribly apologetic and admitted it was all their fault as they had just lost track of time in the castle.

Our final stop of the day was Stonehenge – it was beautifully sunny and, as my group left the coach, one man asked if he’d need his umbrella. I laughed and said: “Nah, it’s not going to rain today”. Famous last words! Once the group were up by the stones, which are 1½ miles from the visitor centre, guess what? It rained! Luckily not too much and not for long, but it did rain. Boy, did I get some stick back on the coach.

Friday
Today was a day off, but I’d offered to take a couple of Blue Badge students on a walkthrough of the National Gallery so headed out reasonably early to meet them. They have their exam (a tour of the gallery) in September and it’s hard – there are 21 paintings on the tour and you have to be able to deliver a 5 minute presentation on all of them. I remember my training and exam well. I felt like I would never be able to find my way through the gallery from one painting to the next, let alone be able to talk about each one.

The Rokeby Venus by Velazquez

Art was never really my ‘thing’, but once I realised that I could talk about the stories in the paintings and not just the history of the art, the paint techniques and the artists, it became much easier. It was still a tough exam, but I actually started to enjoy the art. I love that Caravaggio was the bad boy of the art world in the early 1600s (arrogant, he would swagger around town with his mates, and he killed a man in a duel), that Constable’s The Haywain is like a chocolate box cover, and that a suffragette slashed The Rokeby Venus with an axe to highlight the struggle for women’s votes in 1914 (well, not that she damaged the painting but the passion it inspired in her). On her arrest, Mary Richardson said: “I have tried to destroy the picture of the most beautiful woman in mythological history as a protest against the Government for destroying Mrs Pankhurst, who is the most beautiful character in modern history.”

I hadn’t been to the National Gallery for a while, so today’s walkthrough with some students was a good chance to refresh myself on the art while giving them some guidance on how to talk about each painting. We only managed to talk through 12 paintings in the time we had, plus after 12 we were all feeling a little brain dead, so we called it a day and agreed to finish off another time.

Sunday
Back to the Cotswolds today on a lovely sunny Sunday, with a trainee coach driver who hadn’t done this route before. Occasionally with new drivers you have to direct them as well as provide the commentary, which is pretty hard work but, luckily for me, the tour company sent along another driver to act as his mentor and make sure he knew what he was doing and where he was going.

The day went well, no wrong turns, no one left behind anywhere, the sun shone all day and the passengers enjoyed their trip out into the countryside.

However, I was very jealous when we got to Bourton-on-the Water and saw another tour in the most gorgeous vintage bus.

Now why don’t I get those kind of tours?!