Diary of a Guide…Cakes, Stones and a Codpiece

In what was a very chilly week, somehow I ended up in two of the coldest places to guide; the Tower of London and Stonehenge, but warmed up beforehand with a spot of tea.

Monday
I’ll often partake of that quintessentially British tradition, afternoon tea – all in the name of research you understand, as overseas tourists often wish to ‘take tea’, and I think it’s good to be familiar with something you are going to recommend. So it was off to St James’s Hotel and Club to sample their ‘It’s All In The Game’ afternoon tea with a friend and guiding colleague.

Now I love afternoon tea – it’s civilised, it’s quirky, and it has tea, scones and cake. And this one also has board games – what’s not to love?! 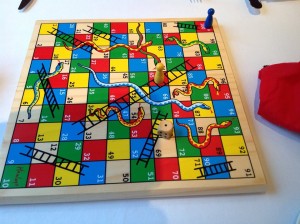 Before the tea arrived, we got to play a game (or more than one if you wish) from a selection that included Ludo, Backgammon, Chess, Monopoly and Scrabble. We opted for Snakes and Ladders, on the basis that some of the games would take too long and others would be far too competitive.

I haven’t played Snakes and Ladders in years, and regressed back to my childhood picking my favourite colour counter, getting very excited when I landed on a ladder and then very disappointed when I had to slide back down a snake! I lost by the way, as my friend landed on a ladder that took her straight to the winning square.

The afternoon tea didn’t disappoint either. The scones were lovely, but the cakes were amazing. 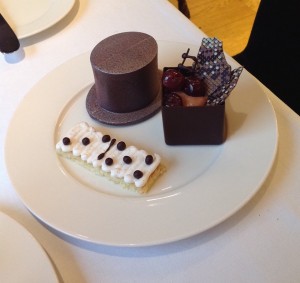 Deciding who should have which cake was almost as competitive as playing the game and in the end we cut most of them in half – so we both won!

The evening found me delivering a lecture to the Friends of the Museum of London on Lord Mayors and Livery Companies, using objects in the Museum’s collection to illustrate the talk. From the first mayor of London, Henry Fitzailwyn, in 1189 to the current Lord Mayor, Lord Mountevans, via the Worshipful Companies of Mercers, Brewers, and Tax Advisors, among others. It’s lovely to be able to talk about museum objects and entice the Friends to revisit and look at the collection in a new light.

After all, who would look at the portrait of Lord Mayor William Hewett (check it out in the Medieval Gallery at the Museum of London) and think that this rather austere looking citizen promised his daughter’s hand in marriage to his apprentice?

As a child, Anne Hewett fell from a window in their house on London Bridge into the teeming waters below and Edward Osbourne jumped in to save her. When years later rich and noble gentlemen came a calling, Lord Mayor Hewett reportedly said: “Osbourne saved her, so Osbourne can have her!”

Tuesday
I’d promised to spend the day with Laura, a trainee Blue Badge guide who is about to take her final exams and who, like all of us after 2 years hard slog, was starting to feel like she couldn’t do this. I remember the feeling well – you’ve studied hard, learnt more than you thought possible about a huge number of topics (royalty, art, history, agriculture, architecture, cathedrals – the list is endless), honed your skills, walked London’s streets, and now you have to sit a written paper, pass a coach panoramic exam, and qualify to guide in Westminster Abbey, the British Museum, the Tower of London and St Paul’s Cathedral. Six exams in two weeks – it’s tough.

When I was training as a guide others freely gave me their time and knowledge and I feel it’s only right to pass it on – but did it have to be at the Tower? In February? On what felt like the coldest day of the year??

I froze (even with my thermals on) while Laura delivered her commentaries on the Bloody Tower, Traitors Gate, Execution Site and Jewel House, and was then very relieved when she admitted that she needed help with the armour in the White Tower. Hurrah – indoors, in the warm!

Henry VIII’s horse armour reminds you that he was an athletic hunk in his youth, and in love with Katherine of Aragon. He really was a knight in shining armour on a white charger! 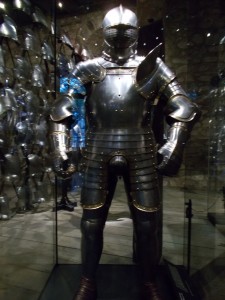 The garniture (a mix and match set of armour for use in different tournament events; joust and foot combat) on the other hand is Henry older and fatter. But it’s tricky to guide as, not only do you have to talk about Henry VIII (that’s the easy part), you also have to explain how the armour was made, including the difference between engraving and etching in the decoration. And you have to mention the codpiece! Without giggling!

Friday
Well, if I thought the Tower of London was cold, Stonehenge is even colder on a miserable February day.

Although I am qualified to guide at Stonehenge, I have never been back since I completed the Blue Badge course. Not for any other reason than I’ve never been offered a job there. So a fellow Blue Badge who guides there a lot (she’d been there twice this week already) took me down to give me a refresher ready for the start of the main season. 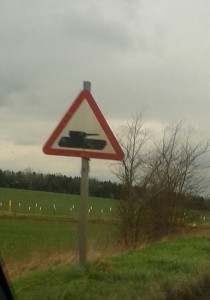 Located on Salisbury Plain, Stonehenge is right next to a large military base and the sound of gunshot often disconcerts visitors – they tend to get even more worried when they see the ‘Tanks Crossing’ signs!

Now like many people, I’ve always just considered Stonehenge to be a bunch of really big old stones in a field. Sacrilege I know, and yes I know it’s 4,500 years old, an amazing feat of prehistoric engineering and a World Heritage Site. But they’re stones – big ones – in a field – and it was very, very cold!

A cold and windy Stonehenge

However, after a visit with Lucy, I finally got it, and it is truly amazing. The thought of prehistoric man transporting the Sarsen stones each weighing up to 30 tons across the landscape from Marlborough and, in the case of the Bluestones (3-7 tons each) across mountains, valleys and rivers from Wales, and then levering them into upright positions with lintels on top creating a perfectly horizontal stone circle suspended 6m in the air is just unbelievable.

Archaeological evidence means we know when Stonehenge was built and how it was built, but not why it was built. Theories abound; it’s a place of ancient worship, a centre of healing, an astronomical computer, a ceremonial site, a druid temple (the druids came along much later by the way), and even an alien site – very Stargate SG1!

And if you’ve never been, then you should go – but did I mention it’s cold?