Diary of a Guide…Coach Trips, an Empty Castle and a Model Village

What a week! It started with a fun but hectic cruise ship pickup and finished in a model village, which has its own model village!

Tuesday
When the alarm went off at 3.15am, I wondered what on earth had possessed me to accept a cruise ship job. Before you start thinking ‘how lovely’, let me just clarify that this is not me enjoying a cruise, but picking up a coach load of tourists from a cruise and taking them on a shore excursion for the day. 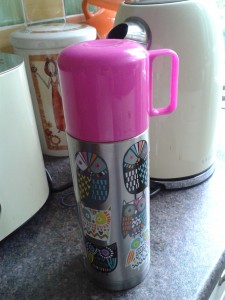 I struggled out of bed and brewed up my flask of tea – can’t survive an early start without it, and there is nothing at Southampton Docks apart from a rubbish vending machine that is often broken. My cab picked me up at 4.00am and delivered me to a hotel in Victoria where, along with about 45 other Blue Badge Guides, I boarded the coach to take us down to Southampton. On board there was a weird party-type atmosphere (it was 5.00am!) as people caught up with old friends, swopped notes about which excursion they were leading and dished out advice to guides who’d never done a cruise pickup before.

Once we got to Southampton the sheer scale of the job unfolded. Lined up at the dockside were 101 coaches! A large number were coming back into London for the day and their guides were meeting them there – no early start for them. But the rest of us were taking our coachloads all over the place; Bath, Stonehenge, Windsor, Salisbury. I was Coach Number 37 and was off to Winchester and Oxford for the day, along with about another 8 coaches.

Getting that many people off the cruise ship with their luggage and onto the right coach is not easy, so I eventually left the docks over an hour late. However, that was fine as our first stop was Winchester and a tour of the cathedral, which didn’t actually open until 9.30am. So at least by the time we got there we could go straight in – or so I thought!

This was where I discovered that my Indonesian group were lovely, but uncontrollable. In the five minutes it took to walk them from the coach drop off point to the cathedral, they scattered and I lost two of them who ducked into a shop without me seeing where they went. Having rounded everyone up again, I did the quickest tour ever of Winchester Cathedral and whizzed round telling them about the history and architecture and pointing out the mortuary chests which contain the bones of Saxon kings, including Cnut, and the grave of Jane Austen.

Stopping briefly at the bust of deep-sea diver, William Walker, I told the story of how he spent six years underpinning the cathedral to shore it up working by touch in the dark, murky waters below. The cathedral is built in boggy land and was in danger of collapsing back in the early 1900s, so Walker spent six hours a day in the water below excavating trenches and filling them with bags of cement. His diving suit was so heavy that when he stopped for lunch, he just used to take off his helmet, eat and then go back into the waters.

The cathedral is no longer in danger of falling down, but the crypt still floods regularly.

We were in and out in 30 minutes and then, after they’d all been to the loos, it was back on the coach to try and make up time on the way to Oxford.

We caught up a little on the drive and headed straight into the centre of the city for our lunch stop at The Mitre in the High Street, who did a great job serving 35 tomato soups, followed by 35 fish and chips and then 35 slices of cheesecake in record time.

Because they all wanted to shop, I abandoned the walking tour of the city and gave the group free time before we regrouped for our visit to Christ Church. Probably the most visited college in Oxford, it’s mainly visited for its Lewis Carroll / Alice in Wonderland and Harry Potter connections rather than its history and architecture. However, my group loved it, and we finished the day with a group photo in Tom Quad before boarding the coach for the journey to Heathrow Airport, where I waved them off to get their flights back home, and then headed back into London and home – exhausted, but happy at a job well done.

Another coach group today, and this time I spent the day playing catch up as my timings went to pot! I left London a little late as some of my passengers were late arriving for the coach and a family of eight didn’t turn up. So with 63 passengers on board a double-decker coach we set off to Windsor.

Windsor Castle opens at 9.30am and I was pretty confident we would be the first coach there – until we hit the M4! The traffic slowed to a crawl, as there were three separate accidents ahead of us. So instead of getting to Windsor around 9.00am, we didn’t arrive at the Castle gate until 9.45am. 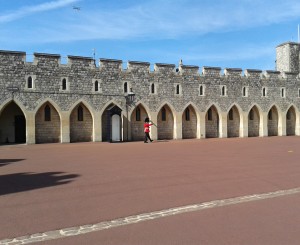 Just me and the Guardsman at Windsor Castle

However, we sped through the ticket hall and security as I was still the first coach to arrive (all the others were still stuck on the M4) and I’ve never seen Windsor Castle so empty, not even in the middle of winter. There wasn’t a soul there when we arrived, so it was bliss conducting my tour of the castle precincts without anyone else around, and I got my group straight into the State Apartments.

Back at the coach park after my group had time to explore Windsor and watch the guard change, they came back mostly on time and I was reunited with the family of eight as another coach tour had given them a lift to Windsor. However, we still left later than originally planned as I’d given the group their full time at Windsor even though we’d arrived late.

We made up a little time on the way to Bath, where I walked the group to the Roman Baths and then gave them free time to explore. I grabbed a cup of tea and had a little rest, before meeting my group at the coach pickup point, known as Bog Island (better than it sounds). Two people were late back, so we left Bath later than planned again, and whizzed our way through the countryside to the medieval village of Lacock with its abbey and Harry Potter connections – a house in the village was used as the location for Harry’s parents’ house in the films and filming also took place in the abbey itself.

After a rather late lunch in the 14th century George Inn, we headed to our last stop of the day at Stonehenge and got there with 10 minutes to spare before the last entry – phew!

Friday
Today was much more relaxed as I took a lovely group out to the Cotswolds for the day in the warm sunshine that has finally emerged.

I love guiding in the Cotswolds. It’s just so beautiful and overseas visitors are enamoured with ‘olde England’ – it’s just how many of them imagine England to be with its picturesque villages and quaint cottages.

Our first stop in the village of Bibury went well, until we came to get back on the coach and two of my visitors were missing. I ran round the village (it is not that big) and couldn’t find them anywhere. At this point I was starting to worry – how on earth could I lose two people in a teeny tiny village?! 20 minutes later, just as I was giving up and about to head off without them, they came ambling slowly down the hill from the back of the village without a care in the world and completely oblivious that the other 50 people had been waiting for them!

Our lunch stop in Burford was great – again, it always amazes me how they can get so many meals out at one time, but The Cotswold Arms (not been there before) served lunch quickly which gave the group a little extra time to explore the village. The coach driver and I had a little table in the corner of the bar area, away from the group, so we could relax over lunch. If you ever visit, I highly recommend the homemade steak and ale pie, which I followed up with apple crumble and custard.

Feeling more like taking a little siesta rather than delivering a guided tour, our next stop was Bourton-on-the-Water. My driver kept making fun of me, as I tend to pronounce it ‘Burton-on-the-Water’ rather than ‘Boorton’, but as he kept correcting me, I switched to the correct pronunciation, stressing it accordingly – which just made him laugh even more.

Once there, I managed to take a little time out and visited the model village, which I’ve not managed to get to before. 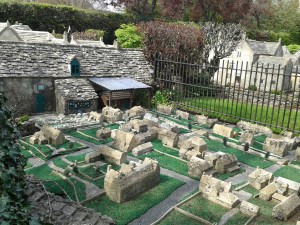 A visit is well worth it, as it is an exact miniature replica of the village of Bourton-on-the-Water and was built in the garden of the Old New Inn back in the 1930s. The owner at the time, landlord C A Morris, actually measured the village and then recreated it on a scale of 1/9, opening it to the public in May 1937 to celebrate the coronation of King George VI.

The model village is just fantastic with its miniature houses, replica river Windrush running through it, and church complete with singing choir.

The detail is incredible – right down to the miniature Old New Inn pub, which even has a model village in its garden!