Diary of a Guide…Firemen, Helmsman and Shakespeare

This week started with an urgent request for a tour that I haven’t done in 7 years, and finished with a Shakespeare cruise.

Tuesday
I got an email this afternoon asking if I was free on Thursday morning to conduct a tour of the City of London’s Guildhall for a private group and, as luck would have it, I was free. The tour needed to cover the Great Hall, Old Library and the crypt. So having accepted the job, I dusted off my notes on the Great Hall as I haven’t looked at them since 2009 when it was the venue for the practical exam to qualify as a City of London Guide.

It’s amazing how it all came flooding back. Details on the statues and monuments, the state trials held there in the 16th century, the livery company shields and banners, the legend of Gog and Magog – even the privileged regiments (who are allowed to parade through the City with drums beating, bayonets fixed and colours flying!)

Having been briefed by the City of London Remembrancer’s Office that the tour was part of a day of activities for a senior member of the London Fire Brigade for his retirement and that they particularly wanted the tour to include connections to the Great Fire of London, I brushed up on that too. So approached Thursday feeling fully prepared, even though the tour was at short notice. Thursday
Thursday morning dawned and I arrived armed to the teeth with Guildhall connections to the Great Fire of London and the Blitz, having identified the shield for the Firefighters’ livery company, and found all images connected to fires in the stained glass windows. So there I was waiting for a group of firemen to arrive, only to find that they weren’t firemen at all! Unbeknown to myself or the client that booked me, the tour had been donated by the retiring senior firefighter as a charity auction prize, and the group were the people who’d bid for it. No wonder they’d looked confused when I’d introduced myself and joked that they probably knew more about the Great Fire of London than I did!

Still the tour went well and the group enjoyed hearing about the banquets that took place in the Great Hall over the centuries, how Sir Winston Churchill received the honorary freedom of the City in 1943 amid the ruins of the bombed out hall, and the trial of Anne Askew who is the only woman on record to have been tortured at the Tower (she was burnt at the stake for heresy). 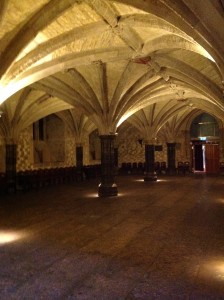 Medieval crypt at the Guildhall

We also took in the Old Library, where the Guildhall library was housed between 1873 and 1974, with its wonderful stained glass window containing famous figures connected with books and printing; William Caxton and the first printing press in (top middle), Richard Whittington who founded the original medieval library (bottom far left), and the marvellously named Wynkyn de Worde (top left) who was a pupil of Caxton’s and went on to set up his own printing press in Fleet Street.

We finished the tour in the medieval crypt, with its modern stained glass windows installed as part of restoration projects in the 1960s and 1970s. The group were lovely and even appreciated all the stories of fire and destruction that I included. They also looked suitably impressed when I pointed out the Firefighters’ shield and explained its symbolism – well, it would have been a shame not to mention it, especially as I’d gone to the trouble of locating the 103rd livery company high up near the ceiling.

After the tour, I headed over to Canary Wharf for a meeting at the Museum of London Docklands, and whilst there took the opportunity to visit their newly opened No. 1 Warehouse Gallery. The Docklands museum is located within a Grade 1 listed sugar warehouse, built in 1802 as No 1 warehouse when the area was a thriving dock bringing goods into London, and the new gallery tells its story.

It conjures up a great picture of what working at the docks, and in the warehouse, was like, and features a wide variety of objects including iron-beam scales which weighed heavy goods, a bronze call-on bell rung to signal the practice of calling on (or choosing) the men who work that day, various working tools, and my favourite, the Helmsman carving. Helmsman in No 1 Warehouse gallery

Saturday
On a beautifully sunny afternoon, I boarded the Pride of London for another of the Museum of London’s Thames tours. This time the tour was on William Shakespeare, and thankfully our helmsman was more alive than the one I encountered on Thursday.

Alongside Julian Bowsher, senior archaeologist at Museum of London Archaeology (MOLA), I provided the commentary for the tour.

Julian talked about the 16th century playhouses, the archaeology of theatres such as the Globe, the Rose and the Curtain, and Shakespeare’s London, while I talked about Shakespeare’s life, London landmarks connected to his plays, and Shakespeare’s legacy as a wordsmith. I just love that Shakespeare left us with many phrases that are still in ordinary use today, such as ‘with bated breath’ (Hamlet) and ‘Greek to me’ (Julius Caesar), and also that virtually everyone can quote Shakespeare. I mean who isn’t familiar with some of his most famous lines; “We few, we happy few, we band of brothers” (Henry V), “Et tu Brute?” (Julius Caesar), “Alas poor Yorick” (Hamlet), “Romeo! Romeo! Where for art thou Romeo?” (Romeo and Juliet). I’m quite sure everyone has their own favourite Shakespeare quote…and yes, on the tour I did quote ‘Carry on Cleo’ with “Infamy, infamy! They’ve all got it in for me!”

The only slightly hairy moment of the tour came when Julian was so busy talking about the Blackfriars playhouse, that he almost missed The Globe Theatre on the other side of the river until I prompted him – phew!

So until next week – “Good night, good night! Parting is such sweet sorrow” (Romeo and Juliet).