Diary of a Guide…Heroes, Villains and Rain!

Well, this week started in spectacular style with an event at the Queen’s Gallery, then I got soaked in the middle of the week, and it ended with a talk on the Great Fire of London.

What a great way to start my week – in the fabulous surroundings of the Queen’s Gallery at Buckingham Palace, on an ALVA (Association of Leading Visitor Attractions) workshop on theatre, performance and contemporary art in attractions.

I was attending on behalf of The View from The Shard and the room was filled with people from all sorts of visitor attractions; museums, galleries, heritage sites, gardens. Even representatives from London Zoo were there.

As this was my first ALVA event, I wasn’t sure what to expect, but the speakers were just inspiring. Historic Royal Palaces kicked off talking about their costumed performances for children and also gave an overview of the phenomenon that was ‘Blood Swept Lands and Seas of Reds’ (more commonly known as the poppies) at the Tower of London.

Other speakers talked about collaborations for modern art installations, making the most of the landscape, the cultural legacy of the Olympic Park and theatrical productions, but the highlight of the day for me was Helen Marriage, Chief Executive of Artichoke. And if you’ve never heard of Artichoke, well I only have to say that they were the organisation behind Lumiere London in January this year, and that amazing spectacle will immediately spring to mind.

Helen talked through how the Lumiere London project came about and the challenges involved, not least raising the funding as the project started with no budget. Other challenges came from Transport for London who originally told her that they couldn’t close Oxford Circus for the event. When asked why – because of the commuters. When she said, well we’ll do it after the commuters have gone home, they said no because of the shoppers. She responded with well what if we do it after the shops close, they said no because of people enjoying the nightlife. Finally it all came down to the buses. When asked if they could divert the buses, they said no. That woman must be like a dog with a bone, because she got them to close Oxford Circus for the event – which was just as well because people were lying down in the road taking photographs of the display above them (good job they stopped those buses!)

Thursday
Today it rained. And I got wet. More than once, as that ancient law known as ‘Sod’s’ ensured that I had two walks on a day that was full of showers.

My morning walk, Bawdy Bankside, wasn’t too bad as the showers were more drizzle than proper rain, but it was damp and cold as my group took in the 16th century entertainments on offer on the riverside. We started with the original theatres, The Rose and The Globe, before hearing about American film director and actor, Sam Wanamaker’s, mission to rebuild the Globe as it had been in Shakespeare’s day.

Moving on, we covered the bear baiting that once took place here and, of course, the inns and taverns in the area, The Clink Prison and the Winchester Geese who plied their trade in the brothels and stews.

My group were regulars who normally do country walks, but come into London a couple of times a year for a walk with me, which meant they were dressed for the weather. Good job they were regulars though, as the entire walk ended up revolving around wee – from the urine that people used to sell to the tanners in the area for them to use to soften their leather, to the human and animal urine that Shakespeare’s father would have used in his trade as a glover (again to soften the leather or animal skins). What with all the talk of wee, the sound of the river rushing by and the constant rain, we were all desperate for the toilet by the time we reached Southwark Cathedral, so dived inside to use their facilities and warm up with soup and coffees in their café.

Having dried out, I got absolutely drenched with the corporate group I took on a ‘City Heroes and Villains’ walk this evening. It was drizzling, yet again, but as we left their offices to start the walk, the heavens opened and we got caught in a torrential downpour. Got hand it to them, those bankers are hardy types, as they stuck with me as we galloped through some of the City’s best known and also unheard of heroes and villains. The 1910 Houndsditch Murders where three policemen lost their lives, the destruction caused by the Great Fire of London, the bombing of the Blitz, and London’s first coffee shop (must be a hero to most people these days – who can survive without coffee?).

Along the way we discovered the Boudican revolt against the Romans, the true story of Dick Whittington, Lloyd’s of London (whose reputation was built on settling large claims fast, such as the sinking in 1799 of HMS Lutine and the unsinkable Titanic in 1912), Charles Dickens pricking the nation’s social conscience with his novels, and Thomas Gresham, who aptly built the Royal Exchange in 1571 so traders could meet under cover. Now there’s a man who recognised the problem of London weather! 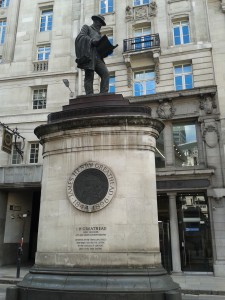 We finished with one of my favourites, James Greathead, who invented a deep tunnel shield that enabled the City and South London Railway to be built between Stockwell and King William Street in 1890. It was left to each individual to decide if the man who enabled the forerunner of the Northern Line was a hero or a villain??

Cold and very wet, everyone stayed cheerful to the end, but I got some strange looks as I dripped all the way home on, yep, the Northern Line!

Saturday
I finished my week dry and warm as I delivered a talk on the Great Fire of London to my local Arthritis Care association, who provide a regular programme for (mainly elderly) people suffering from this debilitating condition – many of them hardly leave home.

I’d spoken at one of their monthly gatherings last year (on the Great Stink) and they’d kindly asked me back again. It’s a bit of a challenge, as they have no projection equipment and you have to be flexible as you can’t start until all the ambulances have delivered people safely to the venue. However, they are a lovely group and are very interested and appreciative. Oh, and I also had to deal with the friendly heckling from one old boy (he’s 90) who always sits at the back and can’t hear very well – there’s always one!

My talk finished with a few questions over a cup of tea and a biscuit, before I headed home in, yes you’ve guessed it, yet another shower!