Life of a Guide – Crossrail Top 10

Over the last seven months, to accompany the Museum of London Docklands’ exhibition ‘Tunnel: The Archaeology of Crossrail’, I’ve led a series of 10 walks along the Crossrail route in London. We started at Plumstead in the east back in February, and finished at Royal Oak in west London a couple of weeks ago.

It’s been an interesting and rewarding journey – mostly dry, often sunny and full of people who, like me, have been sucked into the story of the creation of this amazing new railway. I’ve learnt loads (particularly about tunnelling, ground movement and sprayed concrete lining), become incredibly geeky about Crossrail and have even been ‘checked out’ by some of the contractors as I delivered the tours – a few have stopped to listen as they’ve walked past me and my group. I must have been saying something right, as they appeared to give a seal of approval as they nodded, smiled and, in one case at Custom House, winked at me.

My ‘man at Crossrail’, Events Coordinator Adam, has been incredibly helpful and generous with both his time and the sharing of his knowledge and insider information, and I really could not have done it without him. Likewise, Jackie Kiely, curator of the Tunnel exhibition, has been a great support and fountain of knowledge on the archaeology discovered during the building of Crossrail.

As the walks have now finished (although who knows, maybe I’ll get to repeat some of them), I’ve taken a look back and come up with my Top 10 favourite Crossrail facts.

10) Muck Away. During construction, over 7 million tonnes of spoil were mined from beneath London, 98% of which was recycled. It was used for all sorts of projects; some went to turn landfill sites into reusable land, some went to farmers who wanted to create new grazing areas for livestock, and some even went to create a golf course. However, the largest amount of excavated material, over 3 million tonnes, was taken out to Wallasea island in Essex to help the RSPB create a nature reserve that is twice the size of the City of London. Oh, and did I mention that about 80% of all that spoil was transported by rail and water, thereby avoiding large numbers of lorry journeys across London. So the new purple Elizabeth line is green too!

9) Tunnelling came close (very close) to Underground passengers going about their daily commutes. At Tottenham Court Road, Tunnel Boring Machine (TBM) Ada came within 90cm of the live Northern line platforms, and within 60cm of the passenger escalators. If you listened carefully at the time, you could have heard the hum of the cutterhead! 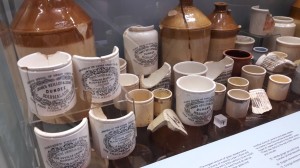 8) Marmalade jars – in among the 10,000 artefacts, covering a timespan of 55 million years, the archaeologists found marmalade jars! Thousands of ceramic jars discovered at the old Crosse and Blackwell factory in Soho Square. Yes, I loved that archaeologists finally managed to prove death by Y Pestis (plague / Black Death) in the 14th century through DNA analysis, and that the jawbone of a mammoth was found at Canary Wharf, and that Isambard Kingdom Brunel’s engine sheds were discovered at Westbourne Park, but I really really love that the archaeologists got just as excited by….marmalade jars!

7) The recruitment consultant who quit her job to become a crane operator. The extended Crossrail family of staff and contractors is an incredibly diverse body of people, with at one time 30% of the integrated workforce being female (against a construction industry average of 11%). One of those is former recruitment consultant, Katie Kelleher, who got hooked on Crossrail when she was recruiting many of their staff. So interested did she become that, without telling anyone, she went for an interview and became an apprentice crane operator with Laing O’Rourke. Katie then spent months sitting in the cab of her 60-tonne crawler crane at the western end of the new Tottenham Court Road station. Now that’s geeky! 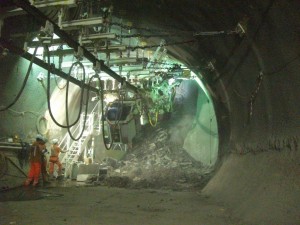 6) An uphill excavator was used for the first time in the UK. Because of difficulties accessing the station to dig downwards to build the inclined barrel-shaped tunnel for the escalators at Whitechapel Station, an uphill excavator was used. Starting at platform level, the excavator worked its way upwards some 30m to street level. Traditionally used in coal mines, the excavator was designed to do two jobs in one. Working its way up using the digger at the front, it also installed concrete lining using a spray nozzle attached to the top of the machine while the entire excavator hung on chains from bolts drilled in the ceiling of the tunnel.

Connaught Passage in Royal Victoria Docks (minus the fish) 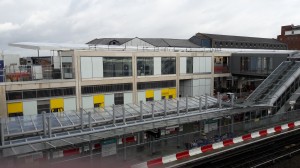 4) A pre-fab station at Custom House. Architects Allies and Morrison designed a freestanding building with an elevated concourse above, using thousands of pre-cast concrete segments. As the construction site was very compact, 887 pre-cast concrete sections were manufactured in Nottinghamshire and delivered to site for assembly – a bit like building out of LEGO, although I’m pretty sure it was much more complex than that. What I love about this though is that, during their tender bid for the contract, they turned up at the interview and presented the station to the panel in model form in a mocked-up Hornby train set box. They then tipped it out on the desk and asked the interviewing panel to put it together!

3) Floating track – there’s 57km of track installed in London….and some of it floats! Sounding very Harry Potterish, I know but floating track slabs have been installed to minimise noise and vibration in sensitive areas. Underneath the nightclubs and recording studios of Soho, light floating track has gone in, with heavy floating track being installed beneath the Barbican’s concert hall. A very clever but complex method cushions the track with use of springs and rubber bearings. Because of the extra depth of the floating track, shallower sleepers made of denser concrete also had to be used in these areas.

2) They buried a time capsule. Not content with uncovering 55 million years of archaeology, the Crossrail team buried some future archaeology of its own. In honour of the final breakthrough and completion of the tunnels, the cutterhead of TBM Phyllis was buried at Farringdon. Alongside, Crossrail used a small drum from the TBM to create a time capsule and filled it with objects suggested and donated by key stakeholders, local people and Crossrail workers, including a 2013 edition of the London A to Z (originally created by TBM namesake Phyllis Pearsall), a tunnel phone that was used to communicate without a standard telephone signal, a Crossrail mug, model train, newspapers from the week it was sealed, a copy of Private Eye, Crossrail PPE, and a copy of the Crossrail monthly ‘On Site’ newspaper. I wonder if archaeologists in a couple of hundred years will be as excited as those who discovered the marmalade jars?