When looking for a venue to do the letter I, I was veering towards Italy as, if I’m honest, I’m not a big fan of Indian food. I would never choose to go to a curry house, have never eaten in Brick lane (I know, I know, as a Londoner I should be ashamed) and only go to Indian restaurants when I’m with a group of friends so just go along with the crowd.

Knowing that chicken tikka masala always features towards the top of those lists of the nation’s favourite foods, and urged on by a friend who promised that I would not be disappointed, off I went with said friend to The Cinnamon Club in Westminster for a girls’ night out.

Now, The Cinnamon Club did appeal, especially as it is housed in the Grade II listed building that was once Westminster Public Library and, since it opened in 2001, it has amassed a great reputation for Indian fine dining. Located close to the Houses of Parliament, it is often frequented by political figures and many a famous face can be seen there. However, not on the night we went because Parliament is on summer recess – actually that was a bit of a relief in the current climate as the sight of politicians would be probably be guaranteed to put me off my food!

Things started badly when, despite being familiar with the restaurant’s location on Great Smith Street, I walked straight past it. I was already running late due to an incident on the underground and was hurrying along the street expecting to see a neon sign, or a flag, or something that proclaimed the name of the restaurant. It was only when I realised that I’d passed a Victorian building that kind of looked like a library that I turned back, crossed the road, and peered at the discrete brass door plate that was inscribed with the words ‘The Cinnamon Club’. However, first impressions were good as I was greeted the moment I entered and they confirmed the table reservation before I hurried downstairs to meet my friends who were already relaxing on the comfortable sofas enjoying their Mango Gimlets (Beefeater gin, green mango, thyme and lime). I ordered a Spiced Apricot Bellini (Crème D’Abricot, club spice mix and prosecco spumante). Priced at £13 and £12 respectively, these were normal cocktail prices and my Bellini hit the spot – although I was a little unsure as to why I had a leaf (thyme?) attached to my glass with one of those little pegs that I use to hang up Christmas cards (it was popped in my bag to use again during the festive season)!

Stunning interior of The Cinnamon Club

Heading up to the dining room, we were shown to our table which was a lovely little booth on the far side of the room, that afforded a great view of the beautiful décor. They make the most of the fact that the restaurant (they refer to it as a club) is in a historic library, and the walls contain thousands of old books. It’s a real treat to dine there for booklovers such as myself, as the room just sparked joy within me – I wanted to browse the walls and fondle the spines of those wonderful tomes (just as I always want to whenever I see a library in a stately home!)

We chose from the main dinner menu, with my friends offering advice as to what someone who ‘doesn’t like their food too hot’ should try. The plethora of menus here offers a wide variety for every occasion, including a tasting menu, lunch menu, Sunday menu, Slow Sunday menu (?), vegan menu, early and late dinner menu (which is very reasonably priced at £30 for 3 courses), a breakfast menu and even a breakfast with books menu!

We decided to share starters so we could sample different tastes, and then each ordered an individual main course. Now as someone who is not keen on hot or very spicy food, I was a little worried about what to order. In fairness I could have gone for the either a crab risotto or a seared rump steak that are offered on the menu ‘for those challenged on the spice front. But the point of my challenge is to try new dishes and foods, so I ordered the shrimp crusted coley fillet with green curry sauce. 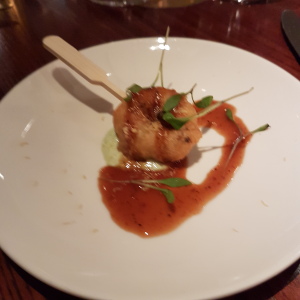 I was a little taken aback when I asked the waiter if the curry sauce came on the side, and he brusquely replied ‘it’s on the plate’. Not really understanding what he meant, I checked if the sauce covered the fish or was separate so that if I found it too spicy I could just leave it, and he brushed my concerns aside (a little rudely, both I and my friends thought). Not wanting to make a fuss (I know, how terribly British), I went ahead and ordered it.

We then turned to the drinks menu, with one friend ordering a Kingfisher beer (as she believes you should always drink beer with Indian food) and my other friend and I sharing a carafe of red wine. Be warned, the wine menu is extensive, but expensive. Whilst you can get a 125ml glass of wine for as little as £5.50, most of the wines are pretty pricey, with a 125ml glass of Barolo costing £29.60 and prices rising to £8,800 for a 1947 bottle of Chateau Cheval Blanc! 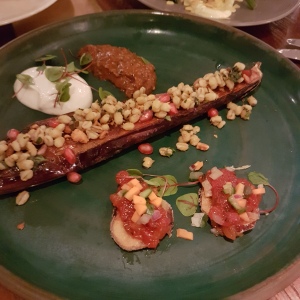 An amuse bouche of a lentil dumpling was delivered to the table, then our starters arrived and we shared grilled tenderstem broccoli with rose petals and spiced almond flakes, crisp fried long aubergine with baby aubergine chutney and spiced almond flakes, and char-grilled organic kingfish with carom seed and carambola pickle. All of which were delicious, but the kingfish was incredible. The firm, ‘meaty’, white fish had a buttery taste, and it just melted in the mouth.

My main course arrived and the green curry sauce was indeed ‘on the plate’, spooned around the coley (if only he’d explained properly). The sauce was creamy and not too spicy, the fish was cooked to perfection, and the basmati rice accompanied it beautifully, although I couldn’t really taste the shrimp crust. To my (probably) uneducated eye I couldn’t even see a shrimp crust, it just looked and tasted pan-fried. However, the fish was lovely and I enjoyed it. One of my friends also enjoyed the coley, while the other opted for tandoori chicken breast with a rich onion crust which sat on top of a mix of toasted buckwheat and brown lentils. Personally, I don’t like lentils, but the chicken looked moist and delicious.

We forewent a dessert and called for the bill, which arrived inside an old book – a lovely nod to the venue’s history.

All in all, the evening was a success. The setting was gorgeous, the food was beautifully presented, and of course the company was excellent. I’m still not a huge fan of Indian food and it still wouldn’t be my first choice for dinner, but if you want an impressive venue and fine dining, then this is the place for you. Just remember, you won’t find chicken tikka masala on the menu!