After a little break on my Foodie A-Z (well my waistline can only take so much), I restarted today with J for Jamaica and, for those of you who have been following my culinary journey you will be wondering what happened to I? Don’t worry, I haven’t missed it out – just delayed it slightly so a friend can do India with me in August.

But back to J, and with London’s temperatures reaching 38º today it was hotter than Jamaica (only 32º), so when I spotted the Lunch Market after I’d finished a tour of the Guildhall Art Gallery in the City of London it seemed like fate to hit the Caribbean food stand Rummanco and sample a little Jamaican cuisine.

Rummanco (www.rummanco.co.uk) has been serving up home-cooked, fresh Caribbean recipes since 2005 and offer both an on-line delivery service and food stalls at a number of markets across London.

As I approached the stand, the spicy smells were tantalising and it was clearly very popular with regular local City workers who were snapping up the curry goat, jerk chicken wraps and patties. I perused the offerings and plumped for a traditional Jamaican jerk chicken meal, which came with rice n peas.

The lovely man who served me kept up a stream of jolly banter and when he asked if I wanted coleslaw and I replied yes, as long as he could find space in the container, he said it was like the TARDIS and we then chatted about our love of Dr Who. Both commenting that our ‘doctors’ growing up were Jon Pertwee and Tom Baker. Nearly went off him though when he asked if I remembered the first Dr Who, William Hartnell!!!

To escape the searing heat, I took advantage of a shady spot in Guildhall Yard, sitting on one of the red metal chairs that the City of London Corporation handily supplies and tucked into my steaming lunch. 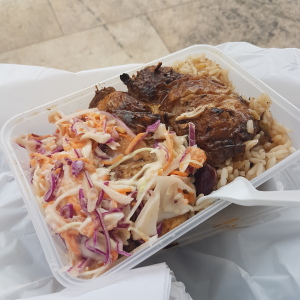 The jerk chicken was moist and the jerk sauce spicy with a bit of a tang, which was offset by the sticky rice n peas, and I wolfed it down while I also gulped down loads of cold water – although I’m really not sure if I was sweating because of the heatwave or the spices?

Jerk is a cooking style that is native to Jamaica and there are various theories as to who first created it – it could have been escaped African slaves in the 17th century who developed it when they mixed with the local tribe and introduced a marinade and cooking pits to the Tainos tribe’s cooking style. The name ‘jerk’ is said to come from a Spanish term, charqui, which is a type of dried meat, but it also comes from ‘jerking’ which means poking holes into meat so that flavour from spices rubbed into the skin can be more easily absorbed.

Whatever its origins, my jerk chicken hit the spot today and, if I closed my eyes and blocked out the sounds of the City, well I could have been on Montego Bay!