Oh my goodness! How on earth have I never tried Korean food before?? Steamed buns are just amazing!

But I digress…….this culinary experience happened on the spur of the moment, when I was killing time in the King’s Cross area, needed to eat and stumbled across Kimchee (https://kimchee.uk.com/) in Pancras Square as the rain bucketed down. Fate had stepped in and offered me the chance to tick K off my list.

Kimchee is a modern / contemporary restaurant and bar, which I imagine is very popular with office workers in the area – they have another branch in Holborn. As it was late afternoon when I arrived, the restaurant was pretty empty with only a few tables taken, and I was greeted warmly. Upon asking for a table for one, I was shown to the counter at the window, which I really liked. Now I often eat alone and have no problem in doing so, but I do know that some people can feel awkward in restaurants when dining alone and, let’s be honest, there are some restaurants that make you feel like a pariah. I’m not sure why, but some restaurants think it’s odd that people on their own are hungry and want to eat??? So this made a lovely change – a restaurant that actively welcomes lone diners, and having the counter at the window meant I had a view and could watch the world go by as I dined. 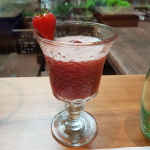 As is my custom, I ordered a drink, spurning the wines (not Korean), the Korean beers (I don’t generally drink beer) and the traditional drinks, and opted for a ‘Korean cocktail’ – who knew this was a thing?? My Lychee Love was a delicious mixture of vodka, sweet lychee, pomegranate and mixed berry vinegar Hongcho. From what I can gather, Hongcho is a fruit based red vinegar, which can be used in a variety of drinks. Often diluted with water or milk., trust me, Hongcho goes very well with vodka! From friends, I knew that fluffy steamed buns are a treat, so I ordered chargrilled beef buns to start. And I was so pleased I did. Two fluffy buns arrived stuffed with beef and a spicy sauce and, quite honestly, I was in heaven! Well, the buns do taste like little fluffy clouds of deliciousness! The perfect starter, although you could just have these as a filling snack and I know that people often buy then from street food trucks for lunch. The beef was tender and the ‘buns’ just melted in my mouth.

Now for my main, I had ordered a chicken dolsot bibimbap – which as the menu said was a ‘hearty mix of sticky rice, vegetables, egg, red chilli paste and sesame oil’ topped with shredded chicken and served in a sizzling in a stone pot. Bibimbap literally means ‘mixed rice’ in Korean, with bibim meaning mixing various ingredients and bap being rice.

Luckily for me, there was a lady (I’m assuming she was Korean) sitting a couple of spaces along from me at the counter and while enjoying my steamed buns, she had been served a similar dish and I’d watched how she tackled it. Observing how she’d separated her chopsticks and then rubbed them together to ensure they were nice and smooth. Now I know that this is an insult in Japan, because it suggests the chopsticks are cheap and you are smoothing them out to get rid of any splinters, but maybe it’s different in Korea (chopstick etiquette is a minefield to the uninitiated). Then she took the spoon and her chopsticks and vigorously stirred the contents of her bowl, before using the chopsticks to scoop the bibimbap onto her spoon and eating it off that. My bibimbap arrived and the waitress reminded me not to touch the boiling hot stone pot and to ensure I stirred its contents to mix it up. The egg dissolves into the hot sticky mixture and the whole dish was just superb – filling, tasty and 맛 있은 (which according to Google translate means ‘delicious’).

Bibimbap is a very symbolic dish, and must be good for you as the colours of its ingredients represent different parts of the body, with black or dark coloured ingredients representing North and the kidneys (e.g. shiitake mushrooms), red or orange representing south and the heart (e.g. chilli, carrots), green for East and the liver (e.g. spinach), white is West or the lungs (e.g. rice) and yellow being the centre, or stomach (hence the egg). They say food is good for the soul – well, Korean food literally is.

Bibimbap – after a good stir!

By the time I’d polished off my bibimbap, scraping the bottom of the stone pot to get to all the crispy bits at the bottom, I had no room for dessert – a good reason to return!

As I ventured back into the pouring rain, with a satisfied smile on my face, the restaurant was filling up, so booking is probably a good idea if you want to be certain of getting a table. I’ll definitely be going back to try more of those fluffy steamed buns – after all, there’s still the pork, chicken and soft-shelled crab buns to try, and as they say in Korea: 건배 (geonbae) or Cheers (empty glass)!