Well for the letter ‘L’ I enjoyed a fun evening with a couple of tour guide friends discovering Lebanese food in the heart of the West End at Levant (www.levant.co.uk), which feels like a little secret. 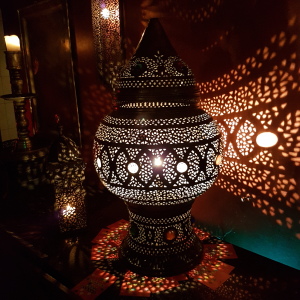 As you leave the hustle and bustle of Oxford Street behind, you find it hiding down a tiny courtyard off Wimpole Street, got through the entrance door and immediately head downstairs to emerge into a Middle Eastern oasis. The décor is sumptuous; luxurious silken fabrics cover the chairs, low sofas nestle in draped corners and filigree style lamps provide subdued lighting.

We ordered drinks, a Beirut cocktail for me (vodka mixed with lychee liquor, lychee juice and a sweet and sour mix), and perused the extensive menu, with my friends laughing when I admitted I don’t really like chickpeas. Let’s face it, chickpeas are a staple of Middle Eastern cuisine, but that is of course the purpose of this challenge – to explore new cuisines and try new foods! Rather than choose dishes from the a la carte menu, we ordered the Lamb Shank Feast menu, which the waiter altered slightly for the non-meat eater in our party. Next up were our individual main courses. Two of us drooled over the succulent slow-cooked lamb which literally fell off the bone accompanied with bulgur wheat, chickpeas and spiced tomatoes. While my non-meat eating friend enjoyed a vegetarian moussaka consisting of an aubergine, tomato, onion, garlic and garlic chickpea stew, topped with creamy yogurt and served with vermicelli rice. By the time we’d finished all of that we were absolutely stuffed, but there was dessert still to come. A fresh fruit platter of grapes, melon, watermelon, and pineapple, and a selection of baklava, Turkish delight and Arabic sweets with mint tea which came in a cute little silver teapot and was served in shot glasses. Although they probably used to serve tea in mini glasses long before they were used for shots! But as if that wasn’t enough, one of my friends (whose eyes are clearly bigger than his belly) had ordered an extra dessert of orange and almond cake!!

Extra drinks had been ordered throughout with my friends drinking beer, whilst I enjoyed the house red wine from Lebanon. And we all enjoyed watching the belly dancer who shimmied, twisted and spun her way around the restaurant. Belly dancing has been performed for centuries, particularly in the Middle East, with slightly different styles performed in different countries, with the Lebanese dance today being a version of the traditional classic style with fast layered shimmies and subtle hip movements.

Levant is a great place for a night out with friends, or even a romantic date, as the prices are reasonable, the authentic food cannot be faulted (if anything there was too much and we didn’t do it justice), and the atmosphere is exotic. All in all, an impressive hidden gem, and as the restaurant’s founder says “Sahteyn!” (Enjoy!)