As I sit on my sofa snug in my onesie watching the snow fall outside because, let’s be honest who wanted to do a Roman Londinium walk this morning anyway (?!), I’m thinking back to the days of much colder winters when the River Thames would actually freeze over!

We think it’s cold today, but between the 12th and early 19th centuries, the Thames would regularly freeze and, Londoners never being one to pass up an opportunity, held frost fairs on the frozen river.

These were great festivals of entertainment when virtually anything would go – think Hyde Park’s Winter Wonderland, but on ice. There would be stalls selling food and drink, people roasting ox or suckling pig, and beer tents. You could visit a tavern booth and drink mulled cider or wine, ale, whiskey, even tea, coffee and hot chocolate. People would ice skate, take a ride in boats on wheels dragged by horses, and watch bear baiting. Musicians and actors would perform, jugglers and fire-eaters strolled around, and it was very popular to buy a pamphlet that had been printed on a press set up on the icy Thames, or a souvenir labelled ‘bought on the Thames’. 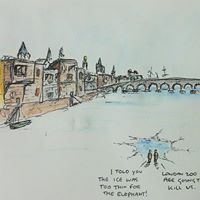 Today, it’s hard to imagine how the Thames could freeze solid, but the old medieval London Bridge had 20 arches on the river and these diminished the flow of water, meaning that the water upstream from the bridge flowed more slowly – so it could freeze. At its deepest, the ice could be 11 inches (about 28 cm) and, at the last frost fair in 1814, an elephant walked across the river!

For the watermen, trade declined as they couldn’t ply their normal trade transporting people across or up and down the river, so they took to guarding the slipways and, rather enterprisingly, charged people to enter the frost fairs. The freeze had a major impact on the port of London too, as the ships couldn’t get in or out.

Of course, the fun of the frost fairs occasionally took a different turn as people slipped on the ice and broke bones, and sometimes the ice cracked and they would fall through into the freezing waters below. But on the whole, frost fairs were fun and Londoners loved them, as did royalty who often attended. King Henry VIII was said to have travelled by sleigh on the frozen Thames.

Could the Thames freeze over today? Unlikely, as old London Bridge was replaced in the 1830s and, coupled with the building of the Embankment, the river is now narrower and faster flowing. Believe it or not, it’s also warmer today by a few degrees, so the mini ice-age that we saw between the 14th and 19th centuries is unlikely to be replicated. That said, in the future maybe climate change will see us return to the days of the frozen Thames, and then we can all enjoy frost fairs again!!