Diary of a Guide…Pilgrimage to The Friars

A quite week workwise, so I spent most of the week conducting research in preparation for a tour with a church group in September – and in the process discovered the most beautiful and peaceful priory in Kent.

Tuesday
When the tour operator booked me to take a group on a trip to Aylesford Priory, known as ‘The Friars’, I’d never heard of it and had no idea where it was. But I said yes to the job anyway, figuring that as the tour isn’t until September I had plenty of time to check it out. So with a free day today, I drove down to Kent and spent the day in the calm and inspiring surroundings of a Carmelite priory and place of pilgrimage.

Founded in 1242 when Baron de Grey gave land to a group of hermits that he brought back from Mount Carmel on his return from the Holy Land, the hermits held their first General Chapter (or meeting) in 1247 and became mendicant friars. These early Carmelites offered shelter and respite to pilgrims on their way to the shrine of St Thomas a Becket in Canterbury, and the Pilgrims’ Hall is the earliest building on the site having been built in the 12th century specifically as a stopping place for pilgrims by the original owners.

Like most religious orders, the Carmelites at Aylesford were dissolved by Henry VIII. The church was demolished and the land passed through various owners over the centuries until the Carmelites bought it back in 1949. They restored the buildings and celebrated pilgrimage masses on the lawn that covered the site of the old church.

Today masses are still celebrated outdoors, in front of the main Shrine, and The Friars continues to offer shelter to pilgrims as well as welcoming visitors of all faiths and none. And very welcoming they were too when I went into the reception and explained that I was doing a recce for a Catholic group, was Church of England and had never even heard of them before!

A lovely lady from the office explained all the group booking information to me, including arranging lunch in the old Pilgrims’ Hall, and then gave me an overview of all the buildings before I set off to explore.

All the work to restore The Friars was undertaken in the 1950s and 1960s, and the decoration, mosaics and ceramics in the chapels reflect the style of the day, with sculptures created by father and son team Philip and Michael Clark, and ceramics by Polish artist Adam Kossowski.

First up was The Rosary Way, a tree lined garden where pilgrims can stroll and contemplate. Next I made my way through the various chapels that surround the main Shrine.

Reliquary in the Chapel of St Simon

The light and airy St Joseph’s Chapel, the family chapel of St Anne’s with ceramics of the Stations of the Cross, the plainly decorated and rather austere Choir Chapel, the Chapel of St Simon Stock (Prior General in 1256) with its eye-catching reliquary containing a relic of St Simon which was brought here from Bordeaux in 1952, and the underground Cloister Chapel, reserved for quiet prayer and dedicated to St Jude the Infant of Prague. 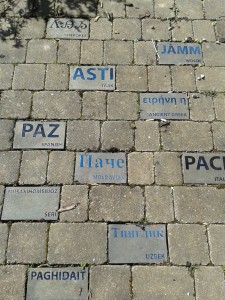 Some of the 200 ‘Peace’ plaques in the Peace Garden

Then I took a stroll in the Peace Garden, which was created in 2010 and has the word ‘Peace’ in 200 languages embedded into the paving stones. It was interesting comparing the words and trying to work out what some of the languages were – I mean, I know what French, Ancient Greek, Cherokee and Welsh are, but where do they speak Wolof or Ingush? Senegal, the Gambia and Mauritania in the case of Wolof, and the North Caucasus region of Russia for Ingush, if you’d like to know.

The whole place exudes a sense of tranquillity and, as I sat for a while in the sunshine on one of the open air pews in front of the main Shrine with its beautiful statue of the Virgin Mary, I could almost feel the thousands of pilgrims seeking calm and refuge who have visited the priory over the centuries.

If you’re ever down in the area, take a detour from the hustle and bustle of Canterbury and maybe make your own pilgrimage to The Friars. I simply cannot wait to show my group of Catholic Americans, the peace of a Carmelite priory in the heart of the Garden of England.