Taking a tip from the newspapers as I flop on my sofa on New Year’s Day 2018, I thought I’d take a little look back over 2017 and deliver my own ‘Review of the Year!’ 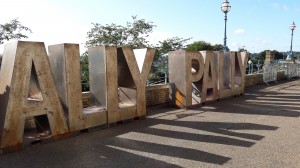 And what a year it’s been! During 2017 I delivered 6 lectures, 23 walks, numerous tours, and a variety of training sessions at The View from The Shard, the London Wetland Centre, Shakespeare’s Globe and Alexandra Palace.

Along the way, I visited Westminster Abbey 8 times, St Paul’s Cathedral 18 times, the Tower of London 20 times, saw the Changing of the Guard at Buckingham Palace 15 times and delivered the commentary on a Thames river cruise 21 times. I also went to Canterbury 3 times, Stratford upon Avon 11 times, Oxford 14 times, Windsor Castle 27 times, Warwick Castle 5 times, Leeds Castle twice, Bath 48 times, Hampton Court Palace only once, and Stonehenge a staggering 50 times – 3 of those to see the sunrise! Tea and cake at the Cake Café in Bat

I’ve calculated that I’ve enjoyed 16 cream teas (9 in the Cotswolds and 7 at Highclere Castle), but lost count of the number of cups of tea and slices of cake I’ve had at various tearooms.

Well, in amongst all the times I got rained on, froze while queueing to get into somewhere, got stuck behind a hay tractor, and groaned as my alarm went off at 5.00am, I got paid to take a family to the Warner Bros Studios to see the Harry Potter film set. I also got paid to teach some Chinese visitors how to take afternoon tea, which I did twice in the Marriott County Hall Hotel where the staff were just delightful and the cakes divine.

Meeting Lt Cdr Nicola Cripps, the first naval officer to be Captain of the Queen’s Guard at Windsor Castle

I’ve been on a coach which broke down, left someone behind because they were late back to the coach, and got stuck in traffic on many an occasion which meant I had to readjust the tour.

However, I have also met hundreds of happy, interested visitors from across the world who really make this job a joy. So, the highlights of my year were:

Creating and delivering a series of walks on the construction and archaeology of Crossrail for the Museum of London. Ten walks across London taking in different parts of the tunnelling and stations, from Plumstead in the east to Paddington in the west, which have turned me into a Crossrail nut! I now know tons about, and get very excited about, the tunnel boring machines, the concreting trains, floating track, uphill excavators, and station design.

My driver, Ricardo, finally got to see Stonehenge properly Becoming a Freeman of the Worshipful Company of Educators

Becoming a Freeman of the Worshipful Company of Educators. A long-held aim of mine became a reality in 2017, when I was formally initiated into this livery company. As someone whose formal schooling ended at the age of 16, and who firmly believes that education is more than sitting in a schoolroom or university lecture theatre, I am looking forward to getting more involved in their charitable work and the promotion of life-long learning.

Dressing up as a Roman to lead some family friendly walks through the City of London for their Roman Londinium Festival. Having always shied away from doing walks for kids, I thoroughly enjoyed the challenge of keeping a group of children entertained whilst teaching them about life as a Roman in London in the 2nd century. 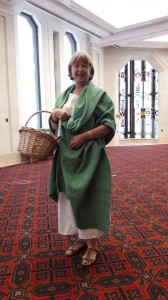 We talked shopping for ingredients to make milk-fed snails, being a soldier in the Roman fort, relaxing in a Roman bathhouse, and fighting in the amphitheatre. What amazed me more than the kids’ enthusiasm, was that none of the office workers bustling around us as we walked the streets batted an eyelid at this Roman lady greeting them with calls of ‘Salve’ as we passed!

Spending three days with the Edmond Santa Fe High School Choir showing them London’s famous landmarks (even though Big Ben is completely under scaffolding?!), Windsor Castle and Oxford. What a fabulous bunch they were – cheerful in the cold and wet, full of questions and curiosity, and unfailingly polite (not sure I’ll ever get used to teenage boys calling me ‘Ma’am’). They were just a joy to be with and will return home after the New Year’s Day Parade with fond memories of their first visit to London.

Who knows what 2018 will bring, although the indications are that we are set for another bumper year for tourism. I have a number of interesting projects in their early stages (training at a military fort, walks on Roman cemeteries and funerary practices, some specialist tours at The Charterhouse to do with Crossrail), and will no doubt be seeing the rocks at Stonehenge once or twice too!